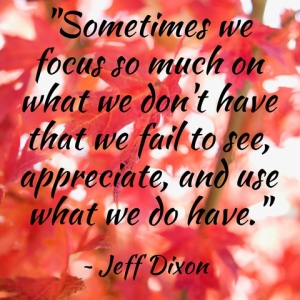 Feeling Grateful for the Frustration in Your Relationship

Have you ever been caught in a cycle of frustration with your partner that felt like you were spinning in circles and getting nowhere near a resolution? No matter how many times you’ve let him know that a certain type of behavior is bugging you, he just keeps doing the same thing over and over again.

Been there, felt that! And I know how that feeling of built-up irritation with no relief in sight can make a person think they’re losing their mind

If you and your partner are currently in the midst of a spin cycle of frustration, this week’s message and tips will help you stop spinning and start feeling way better.

Illustrative Example
While it often seems like we don’t have a choice about how we think and feel, we do have a choice as to what we put our attention on. And whether we choose to focus on the good or not-so-good, whatever we feed grows.

Here’s a personal example that I know a lot of people can relate to:

A few years ago, I was going through a difficult time with my then-partner. We had lost the sense of connection that we had been used to enjoying and were trying to find ways to reconnect.

I felt like I was doing everything I could to make it better, and knew he was making efforts as well, but regardless of our efforts, we continued to feel disconnected and I felt frustrated and irritable as a result.

Months went by and I kept thinking about how difficult it was, how tired I was of being in a relationship that didn’t feel right, and how I just wanted it to be better…now!

I finally ‘caught myself’ in the spin cycle of getting nowhere (here we go again) and “suddenly” had an epiphany on how I was actually making the situation worse by the way I was handling it.

Yes, I needed to allow myself to feel the disappointment and not stuff it down, but I also needed to honor what it was trying to tell me. And I was so caught up in the stress of frustration that I wasn’t allowing myself to hear its lesson.

After realizing what I was doing, I took a step back to re-evaluate my approach. And with a little help from the wisdom shared in Marianne Williamson’s book, A Return to Love, I recognized that I was putting way too much focus on what I didn’t like.

No wonder I was feeling frustrated! I was expending so much energy on what was causing the frustration instead of focusing on the solution and our mutual intention to enjoy each other again. Talk about split energy…can you relate?

This awareness gave me a new focus, which totally helped me shift my attention from what I didn’t want to what I did want – a feeling of connection and knowing that we were there and present for each other.

It then became perfectly clear that the reason why (what I perceived as) his addiction to gadgets, talking about stress from work and multi-tasking bothered me so much was because those behaviors were in direct opposition to supporting the connection we both said we wanted to get back to.

A New Approach = A New Result
With that new level of understanding, I was able to change the conversation we had already re-visited many times. This time, instead of asking him NOT to do this, or NOT to do that, I was able to say with clarity and confidence:

I really want to feel connected with you, and it would help me a lot if we were able to spend some undivided time together – time when we are making a conscious choice to focus on us and the quality of our relationship, without a bunch of outside distractions.

This approach felt much more loving to both of us and we were able to have a meaningful and productive conversation that helped us move forward, instead of slipping back into the spin cycle of frustration again.

Attitude of Gratitude
After feeling the relief in making that shift, I actually found myself being grateful for the spin cycle of frustration that helped me get there. It helped me recognize (at a much deeper level than I could see before) that by changing my focus and communication from what I didn’t want to what I did want, I got much better results.

Having an attitude of gratitude for not-so-pleasant experiences doesn’t mean we won’t experience “bad” things or times of disagreement. What that attitude will do, however, is raise us to a higher perspective, which puts us in a place of power to see the solution with much greater ease!

Your Turn – Putting This Into Practice in Your Relationship
Since these mindful messages are all about empowering you to make healthy changes in your relationship – and since  our next biggest holiday emphasizes the importance of feeling grateful – I encourage you to take a look at something you’ve been frustrated about and ask yourself how you can look at it differently. What’s the message behind your frustration?

If you’re expending your energy on thinking about what you don’t like, but you want things to feel better, that split energy will have you feeling defeated and depleted.

But if you’re willing to turn your awareness and focus to what you do like, and the empowerment that comes from hearing the message behind the frustration, your energy will be expanded instead of expended.

In other words, instead of giving your power away by blaming your partner, reclaim your power by being grateful for the fact that you have the ability to make your own choices. Choose to make new and improved choices when past choices yield undesired results.

This practice of changing your perception may not be easy at first, but the reward of doing so will be well with your efforts. After all, wouldn’t you rather feel better than worse?

The power is within you – choose to use it wisely!

Stay tuned for more mindful messages. Giving you tips, exercises and helpful information to improve the quality of your romantic relationship!

With love and support,